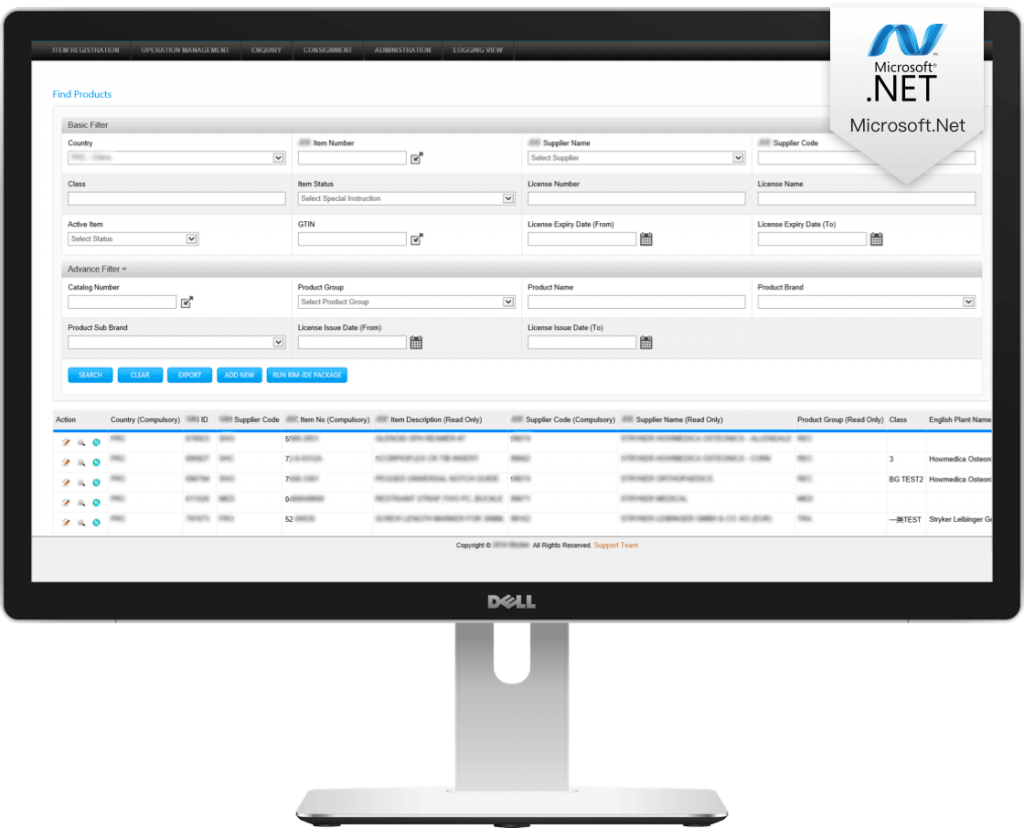 Legacy systems, although working on outdated technologies, are essential for many industries, the medical manufacturing industry being one of them. Sometimes the operational infrastructure of whole companies relies on legacy systems that cannot be retired for various reasons but need to be updated and upgraded to address the contemporary needs.


Shinetech provided remote software development services for a US-based Fortune 500 med-tech company that found themselves in a situation where they needed to update their legacy systems to meet the new industry standards. They manufacture medical equipment and export it to more than 120 countries.


In 2013, the US Food and Drug Administration (FDA) began implementing new requirements for healthcare manufacturers. Our (then future) client was looking for an IT partner to help them upgrade their outdated legacy systems. They needed to meet the new FDA standards and migrate the three separate outdated .NET 2005 systems to the latest tech stack.


The FDA’s new standards demanded that all medical products be labeled with unique device identifiers (UDIs) to increase patient safety and to help optimize patient care. In order to meet these new regulations, the client had to transform their legacy systems. Instead of seeing this as a problem, our client saw an opportunity to finally combine their three separate systems into one, upgrade their technology and add new functions.


Prior to engaging in project discussions with Shinetech, the client had already started working on unifying and updating their systems. However, they quickly encountered several issues and fell behind schedule. That’s when the client turned to Shinetech experts to discuss how to improve the project and bring it back on track.

Considering the critical development schedule, the scope of the project, as well as the time needed to transition the project over to our team correctly, Shinetech experts concluded that it would be much more beneficial for the client to split the project into two phases.
For the sprint 0, Shinetech experts worked with the client’s existing vendor and were responsible for code reviews and quality assurance. After producing a thorough reporton code quality, performance and architecture, which also showcased our expertise, the team started to work on the legacy systems’ coding part. The team workedalongside the client’s in-house development team to unify the separate legacysystems. We also established clear communication channels in this phase – Richard, the team lead, acted as a point of contact in the first phase and led most of the communication.


Since our collaboration began, our team had the client’s best interests in mind, so in order to help in the best way possible, they often traveled to the client’s Asia Pacific headquarters located in Hong Kong to work onsite along with the client’s internal team. On one of our visits, we assisted with the web app’s launch to make sure no critical system errors occurred. We also gained a deep understanding of the system and our client’s related business logic – this allowed us to deal with new requirements and associated tasks quickly and efficiently.
In the first phase, which lasted eight months, our team successfully published the new system. After the successful migration, we started to add new features as per the client’s request. The purpose of the new features was to increase efficiency across the board. The client couldn’t add new features due to their outdated legacy systems. Now when it received the necessary upgrade, they were finally able to do so. Making the legacy system accessible via the web app was a feature that brought a significant efficiency boost. Also, implementing a new analysis report feature reduced the wait time. The employees didn’t have to jump from one system to another and manually extract the reports. This new feature was able to do that for them. Finally, we added a system admin module and an approval management module – they significantly increased the client’s efficiency through an automated approval process.


The client grew the core team from three developers to a full 8-person team. It comprised of a team lead, five developers, a QA tester, and a help desk assistant. The three core developers that were working with the client from the beginning remained in the team too. They were essential for the project’s success since they offered invaluable assistance to the team due to their knowledge, expertise and their involvement from the project’s beginning. In this phase, the whole team gradually got involved in communications. It was far more beneficial for the client – the problems were sorted out faster, and less time was spent idling and waiting for a reply.


The client also visited our team in our Beijing offices on several occasions. We discussed project plans, business requirements, maintained development efficiency and made sure the deliverables were of high-quality. Through working closely with our experts and observing first-hand how they perform, our client became confident that partnership with Shinetech was the right choice. The client was sure our teams would always put in the extra effort to ensure that critical milestones were met. The result – an updated legacy system following the latest regulations

The system we worked on for two years was developed in Microsoft .NET. EDI and SSIS were used for data communication with the external systems. The main functions included:
Before the client spoke to us, they were under the impression that they wouldn’t update the system in time when new regulations became effective. Not only did they completely update their systems, but it was done unobtrusively – Shinetech experts successfully integrated three systems into one and transformed the required processes to meet the new FDA standards. We updated the legacy system in modules so as not to disrupt the client’s daily operations. Since the client’s infrastructure heavily relied on the legacy systems, it was essential to complete the transition as smoothly as possible.


With the help of Shinetech experts, the client now had an updated and unified legacy system they could rely on. The new system also significantly increased the client’s productivity and efficiency – they had the Shinetech DevOps team to help them to implement the new ideas and facilitate the new business growth.
First group meeting
The client flew to meet the whole team in our Beijing office for a 1 week product workshop.

The core team that worked on updating the client’s legacy system comprised of three developers and a team lead. They were working on the project from its start until its completion, while other experts joined when necessary. In the revision phase, a QA tester and report developer worked on the project for a limited time. The team grew in the development phase, again with experts joining in when needed, while the core team remained unchanged.
Business Analyst: Richard Yang
Richard has amassed over ten years of experience in software development and acted as the BA for this project. His knowledge, character, and expertise are beneficial when ensuring that all business requirements are met on time. He also provides excellent help with team formation and is a very vocal advocate for the client.
Lead Developer: Ted Song
Ted is a core team member, and he worked on several projects for this client in the past. He helped to deliver all projects successfully under a very tight and strict schedule.
Developer: Justin Tian
Justin is a technical generalist, and he can quickly resolve various obstacles that projects come up against. He is very detail-oriented and champions accuracy and quality.
Developer: Kevin Wang
Kevin is very easygoing, and he is always willing to take on new tasks. His work is characterized by quick turnover and excellent quality.

Do you need to update your legacy system?
Contact us!